You are here: Home / Series Lists / The Inner World Games

Plot: Robert is a novice, a bit clueless, but with a heart of gold. He lives a peaceful life as a court musician in Asposia’s largest wind monastery.

Contrary to the laws of physics, Asposia is an enormous, hollow space surrounded by an infinite expanse of earth.

The world’s air is provided through three wind fountains…

But as one wind fountain after the other petered out and the wind gods came to Asposia. All of a sudden Robert finds himself in the middle of a whirlwind.

Plot: Solve mind-bending puzzles in a world full of mystery and save the family of the flute-noses! Their dynasty has been watching over Asposia for centuries on end. In secret, they fill the roly-poly world with light and life. But when their existence is discovered, they become hunted. Emil, a trader for odds and ends, made all the Asposians believe that the dynasty is in cahoots with dark forces. The only one who can stop the evil Emil is the heir to the throne: Robert. He has been petrified for three years, though. With a huge dose of enthusiasm, but little to no idea what he’s actually doing, he embarks on an adventure to find the legendary last wind monk. 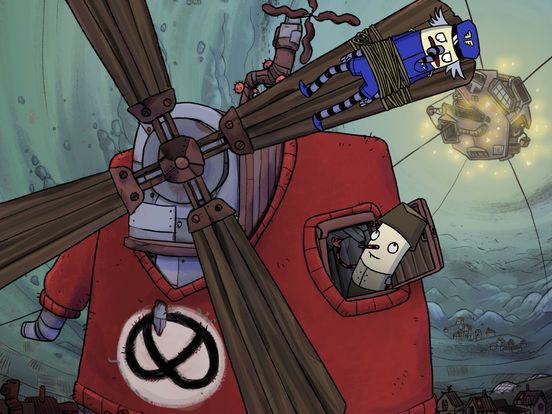