Want to play word games with friends online?
Check out this round-up of the top 10 most popular Facebook word games.
This top 10 list includes Scrabble games, word scramble games, crossword puzzle games and more.
There’s plenty of variety in this word games list.
And they are all free to play on Facebook on your desktop or on your mobile devices.
Some with optional in-game purchases.
For more top word games, see my other posts listed below.

By: Zynga Inc.
Currently: 5 million players.
Average rating: 4.3/5 from 27,188 ratings.
Available on: iPod Touch, iPhone, iPad, Android and Facebook.
Words with Friends is still one of the most popular free word game apps to play on your mobile as well as via Facebook. Build your best words, aim for triple word scores plus play and chat with your friends.

About Words with Friends: Simple and familiar crossword gameplay you know and love, turn-based design lets you play up to 20 games simultaneously, play with your friends or match-make instantly with a random opponent [Source: Facebook Games]

About Wordox: Win with strategic moves. Surprise your opponent by stealing their letters to make your words! Create words, steal letters… It’s anyone’s game in this battle of words! [Source: Facebook Games]

About Words of Wonder: Journey to a storybook universe, where the essence of words themselves sustain life. Countless beautiful worlds wait to be explored! Each chapter tells a story; travel through the pages, overcoming challenges and reclaim the Words of Wonder! [Source: Facebook Games]

About Angry Words (Apalabrados): Angry Words is a multi-user word game that you can play against your friends. It’s available in many languages including English, Spanish, French, Italian and German. It also has a clean, sophisticated and intuitive interface. Game animations make it even better by letting you see your opponents recent moves. [Source: Facebook Games]

5. There are 2 Scrabble game apps to play on Facebook:

About SCRABBLE Mattel: Connect with friends and play with words with the SCRABBLE™ BRAND Crossword Game! Get a match going with just about anyone. Play in English, French, Italian, German, Spanish, or Brazilian Portuguese… We’ve included the Collins Official SCRABBLE Wordlist, so you can check your words in the game! Plus, use the exclusive Teacher feature to become a SCRABBLE master – see what your best word could have been after every turn. [Source: Facebook Games] 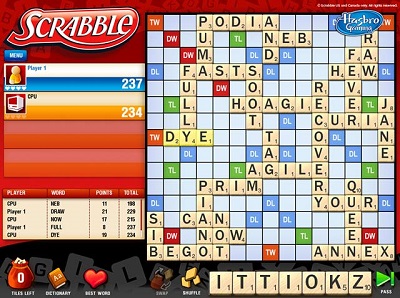 About SCRABBLE 2013: Connect with friends and play with words. With faster action and a smart new look on Facebook, the original word game you know and love is better than ever. Get a game of SCRABBLE going with just about anyone! … Find an instant opponent with a single click. Use the in-game word list, or the built-in official SCRABBLE dictionary to see your highest scoring choices. [Source: Facebook Games]

About WordTornado: Top word game in over 20 countries. GamePoint’s WordTornado brings authentic multiplayer word fun to Facebook. Challenge your friends or find new opponents in a game that will test the limits of your knowledge. [Source: Facebook Games]

By: Zynga.
Currently: 500,000 players.
Average rating: 4.1/5 from 3,315 ratings.
Available on: iPhone, iPad, Android and Facebook.
With beat the clock mode, challenge your friends with competitions to find the words quickest. Plus Power-Ups: Freeze Time, re-scramble the board to gain an advantage or use ‘Vision’ and ‘Inspire’ to find more words.

About Scramble with Friends: ALL-NEW ways to play the world’s favorite find words fast game, New Scramble With Friends! With ALL-NEW Daily Challenges and Player Stats so you can play like never before! [Source: Facebook Games]

About Word Battle: Word Battle is an exciting and addictive, real-time, multiplayer word game. You can choose your opponents either from friend and family cycle, or wide Facebook user audience. [Source: Facebook Games]

About Word Wizards: Travel to a world where words are magic and those who would master words become powerful Word Wizards! Journey through a storybook landscape filled with danger and adventure and challenge the evil Bully who would twist your words and break your spelling. Join our heroes on their quest to become Word Wizards and become one yourself! Your adventure starts now. [Source: Facebook Games]

About Wordz: The game board is never the same, so each game is a different and unique challenge. Wordz will require your reaction time as well as your wits in order to succeed against the clock and your online opponent. [Source: Facebook]