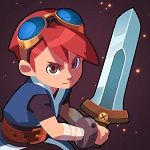 Evoland Games on the iTunes Appstore.
For Mac, iPad and iPhone download.
Including this week’s release of Evoland 2 for iOS.

Unique adventure games that follow the history of RPGs. Through its gameplay and visuals! From indie developers, Shiro Games.

For more new RPGs on iTunes. See my posts included below. Description: Evoland is an action adventure game that takes you on a journey through the history of classic adventure and RPG gaming. As you progress through the game, you unlock new technologies, gameplay systems and ever-improving graphics. From monochrome to full 3D graphics and from turn-based battles to real-time boss fights, Evoland makes you live the evolution of adventure gaming – all with plenty of humour and nods to moments from classic games. [Source: iTunes]

Evoland Games on iTunes for Mac, iPad and iPhone

Description: Onboard on an epic adventure of more than 20 hours through video games history filled with a ton of funny classical games references. From 2D RPG, through 3D vs fight to a shooter, a trading card game and more you’ll get your fill of jumping from a game genre to another, never bored. [Source: iTunes]