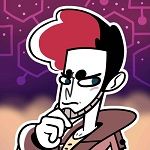 Sequel to their Detective Grimoire game!

Due out on Steam (for PC and Mac) and Nintendo (Switch) this week. Already released on Apple Arcade (for iPad and iPhone) last month.

For more top new detective games to play on your mobile, see my list of posts below.

Plot: Unravel a thrilling mystery by exploring a strange and twisted mansion, discovering curious clues, interrogating peculiar suspects and solving unique puzzles. Freya Fellow has been murdered. The lead suspect? A shadowy figure found looming over her body, wielding a knife. The problem? That suspect… is just a painting. Investigate the entirety of Tangle Tower, from the bizarre and eerie gardens, to the cold and ominous crime scene at the very top. Will you be able to uncover the secrets of Tangle Tower? [Source: iTunes]