You are here: Home / Game News / The Jackbox Party Pack 6 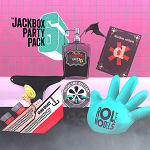 The Jackbox Party Pack 6, new out this month. With even more fun party games to play on TV with your family and friends!

For details of all the games in each Jackbox Party Pack, see my post included below.

Description: It’s the wildest Party Pack yet, with the absurd deathmatch Trivia Murder Party 2, the weird word circus Dictionarium, the hidden identity game Push The Button, the comedy contest Joke Boat and the offbeat personality test Role Models. Use your phones or tablets as controllers and play with up to 10 players. Plus an audience of up to 10,000! [Source: Amazon]

For more party games to play on your TV, you might also like: The Jackbox Party Pack List. With details of the games in each party pack. And how to play these cool games on TV with your family and friends.

Check out my Game Series Lists – A to Z Index for more game series lists.